The two main problems with the vaccine debate

1. The two sides are too hostile to one another, and disregard everything the other side says, while attacking the character of those who hold opposing views.

Because of this, both sides learn little from one another, and can get stuck in narrow and often sloppy thinking.

2. The debate is not allowed to be held publicly.

Because authorities are scared of vaccine skepticism they are unable to rationally deal with it in an intelligent, open way.

And so they pretend there are no doubts over vaccines, except among rabid, irrational "anti-vaxxers", whose views are said to be unscientific and without any basis in fact.

As a result of this attitude and the hostility directed towards vaccine skeptics, the skeptics themselves project the same kind of accusations and loathing back at their accusers.

Open and frank discussion would help heal this rift and would also provide the public with both sides of the story which would help restore faith in the public institutions which are currently seen as being unresponsive to public concern over the issue.

A full and frank debate would shed light on the matter, revealing where more research is needed, rather than the current situation where one side says all is well, with no need to change, while the other side says the whole thing is a total disaster that is destroying the well-being of children and adults, alike!
No comments: 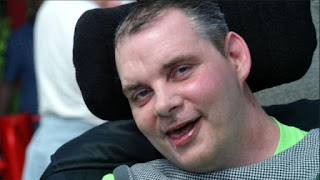 Autism is diagnosed based on symptoms, so what are the underlying physical conditions that lead to those symptoms? I have heard speculation of brain damage and of natural, but eccentric, functioning.

Are we confusing two different things here? Are some diagnoses of autism actually symptoms of brain damage and others symptoms of eccentric, but perfectly natural functioning?

Perhaps a term shouldn't be employed until we understand the underlying dynamics?

As for the cause, if we are talking about brain damage, that is a topic for another day! (Although a crucially important one.)

AND AS A BONUS POINT: Who can correctly guess whether the man pictured above has brain damage or autism?
No comments:
Newer Posts Older Posts Home
Subscribe to: Posts (Atom)