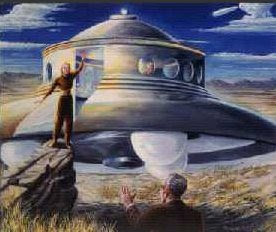 The Illuminati have held onto control politically, economically and technologically several years longer than reasonably anticipated when the Golden Age master plan was designed.

They know that despite the erosion of their global network, they still can control the population unless spiritually advanced civilizations come to Earth.

That would completely doom all of the Illuminati’s dark activities, so they are determined to do everything within their power to prevent the arrival of our benevolent universal family members.

On one hand, the peak of the Illuminati has not been yet dislodged, and except for starting a nuclear war, those individuals’ free will choice to take other steps to prevent extraterrestrials from landing must be honored.

On the other hand, Earth is in great need of technology that can rid her of toxic pollution, particularly at Japan’s damaged nuclear facility; that technology, which is aboard the ships surrounding Earth and has been of some assistance ever since the earthquake damaged the reactors, will be much more effective on site.

There is another issue of urgency too. The nonstop man-made geophysical events and weather manipulation is having a double negative effect. The death toll, property damage, financial loss and other hardships to residents in the affected areas is obvious, but the other effect is global and not realized except by the perpetrators.

At the same time that you are continuously adjusting to the higher vibrations Earth keeps traveling into and the influence of the changing juxtaposition of celestial bodies, you are being bombarded with low vibrations emitted by the quake and storm-causing technology, and the combination is producing new or stronger physical, emotional and mental anomalies.

This is affecting persons who otherwise would be in sound health and it is exacerbating the dis-ease of persons with organic malfunctions and weakened immune systems. At the least, low energy and exhaustion are prevalent, and at worst, many individuals are experiencing severe pain, illness, depression and mental confusion.

Only the elimination of those low frequency emissions can eliminate their effects, and because the various technologies being misused are integrated with power and communication systems, dismantling them without interrupting the services you need must be done at the sites.

Security measures preclude unauthorized persons from entering those areas; however, members of our universal family have the ability to bypass those measures and successfully separate the various systems.

Those two vitally important situations are the reasons for their imminent arrival, but please do continue being patient. Prudent preparations to manage all potential situations on the ground are imperative, and the locations and timing of landings are crucial factors of overall readiness.

Another consideration is the realistic anticipation that a media blitz of “alien invaders!” will attempt to evoke fear among the masses. Although you will greet landings with jubilation, for most people it is one thing to see crafts in your skies and quite another to see them on the ground.

By Illuminati intention, there is an abundance of “entertainment” that reinforces the invasion idea and a dearth of information about the civilizations that have been helping Earth ever since the populating programs started in antiquity.

Let us return to the effects of the low vibrations previously mentioned—that is, how you can obtain some relief until the source is eliminated. It is important to not become fatigued and to avoid abrasive personal encounters and crowds. While the planet’s movement into a more favorable celestial alignment will be helpful, the collective energy level at the moment still is unusually low.

Get as much sleep and rest as possible, even if this means foregoing usual activities except exercising in moderation, which also is helpful in keeping yourselves in balance. Walking—not sauntering, but as fast a rhythmic pace as you can manage without overexertion—is the best exercise during this time.

Spend as much time as possible in natural settings—the energy of trees is immensely beneficial—and listening to soothing music promotes smoother energy flow throughout your bodies.

Eat less than usual, and a diet of primarily fresh fruit and vegetables will be more beneficial because those foods contain more light than cooked foods. Especially now those foods are more easily digested than meat, sea food and starchy foods, and it is advisable to reduce your intake of salt, sugar, sodas, tobacco and alcohol.

Drinking a lot of pure water helps your bodies’ electrical systems to function properly, and monatomic gold will be helpful in ridding confusion and permitting clear thought, also in restoring temporarily faulty memory.

If you are taking prescription drugs, especially antidepressants, ask your health care specialist if the dosage can be reduced—the chemicals in all drugs always have adverse side effects, and these are exacerbating the effects of the conflicting vibrations.